The following LESSON called "PLUS (+) ONE" explores the way that a player can expand on their knowledge by learning ONE chord at a time.  By adding just ONE chord, one can add a completely NEW KEY.  After learning three NEW chords, you can play in four keys. 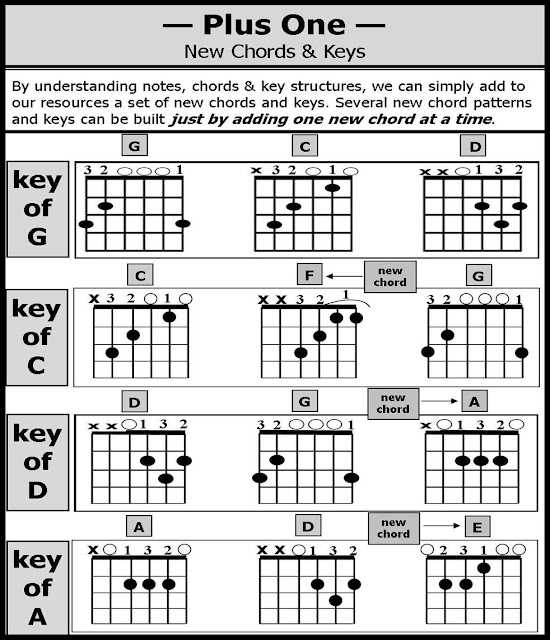 I have another LESSON available called "Plus (+) One--Minus (-) One" which goes into the similarities between chords.  You are shown how to start with 4-5 chords, and by adding or subtracting a note, you are able to learn up to 19 NEW chords.

Posted by GuiTarHeel at 6:05 PM No comments:

In most of my Beginner guitar classes, we stick to using easy Keys like the Key of G.  Our first three chords are in the Key of G--  G, C and D-- and most of our songs are in the key of G also.  But it is important at some point to learn some flexibility and versatility in being able to play in multiple keys.  On guitar, there are basically TWO WAYS to do that.

First, you can learn How-To-Play in all of the different keys.  There are about 15 of them. For each of the keys, there are at least 3-5 chords to learn.  Many of these overlap other keys, so you may already know some of the chords.  But then there will be some Keys which will throw you a curve with a difficult chord or two, and it will put a kink in your learning curve.  Now-- I'm NOT putting down learning everything that you possibly can.  Eventually, this may lead you to learn Barre chords and fancy jazz chords, and who-knows what else?  But there is a nice short-cut or easy way out, and that is by using capos.

What Is a Capo?

A capo is a small device that fits onto the guitar and helps you to "cheat" on playing in various keys.  It has a spring mechanism, and a long, flat edge that clamps down onto the guitar fretboard, so that it raises the tone of the strings, and also allows you to also raise the Key in which you are playing. 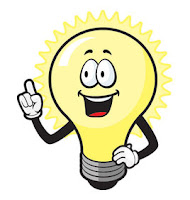 If you have not used a capo before, or don't understand how it works or what it really does, a little light bulb will go off in your head when it does dawn on you.  It's quite remarkable.  There are hundreds, or even thousands, of guitar chords.  A guitar capo allows you to play in 15 different keys, so that you can multiply by 15 the number of chords that you can play.

Parts of the Capo

You may have to work on getting your capo on the guitar.  At first, it may be awkward and even difficult.  But as it usually is with most things, if you relax, and don't try to make it harder than it is, it will soon become easier for you.

There are usually three edges or sides to a capo.
Each capo may be different and therefore have some variations in the way they are placed and used.

Placing the Capo Properly on the Guitar

You don't want to force it on.

How Do I Use a Capo?

Let's say that you have learned the chords (G-C-D) in the Key of G.  However, your friend would like you to accompany her on guitar in a different key, say the key of Bb (B flat).  You know that G to A is a whole step (2 frets).  A to Bb is a half step (1 fret).  You add the two together, and put your capo on the 3rd fret, play the original chords... G, C, D... but you are actually playing in the key of Bb !

This only works well on the first three or four frets, after that the sound and lack of ease of playing deter from its use.  There is no way to "capo down".  You have to pick a key you know, and "capo up" from that to a HIGHER key.  But if you know two or three keys, you can always utilize one of them to get to the key that you desire to play.

Hope this tutorial on the use of a guitar capo will help you in your playing!

Posted by GuiTarHeel at 12:32 PM No comments: 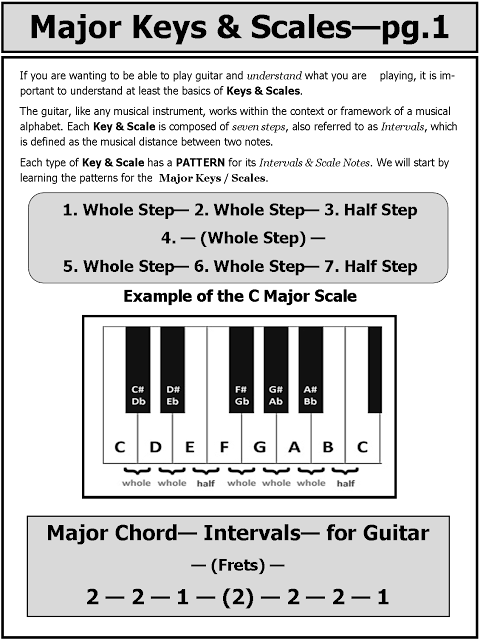 These two pages attempt to explain in an elementary way the concepts of Major Scales and Keys.  If these do not make sense to you, then read over them again, and also check out the other posts in this section on Guitar Theory. 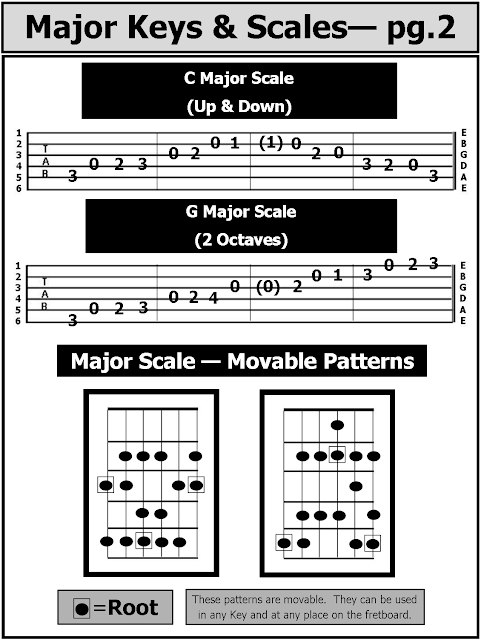 This page gives you several major scales to play and practice.  The first two scales at the Top are specific scales in the Keys of C and G.  The bottom two scales are Movable Scales, which means that they have a Starting Point and an Ending Point, but these notes can be moved ANYWHERE on the guitar fretboard.

The notes enclosed in a box are the ROOT notes.  Place your finger on any of these Root Notes.   Figure out what note on which your finger is placed.  That will be the name of the scale.  It is important to use all four fingers on your hand.  Position your hand where you can comfortably and easily play all of the notes in the scale.  If you need help with either finding the Keys or the proper fingerings, just let me know and we can work it out together.

Posted by GuiTarHeel at 10:05 AM No comments:

This chart is based upon a form that my student RON BOWERS brought to class and shared with us in July 2015.  Thank You, Ron!

This chart shows the Seven Steps of a Major Scale and then applies those steps to the notes/chords of the major scales.

If you don't already have this chart, print it out and follow the explanation below. 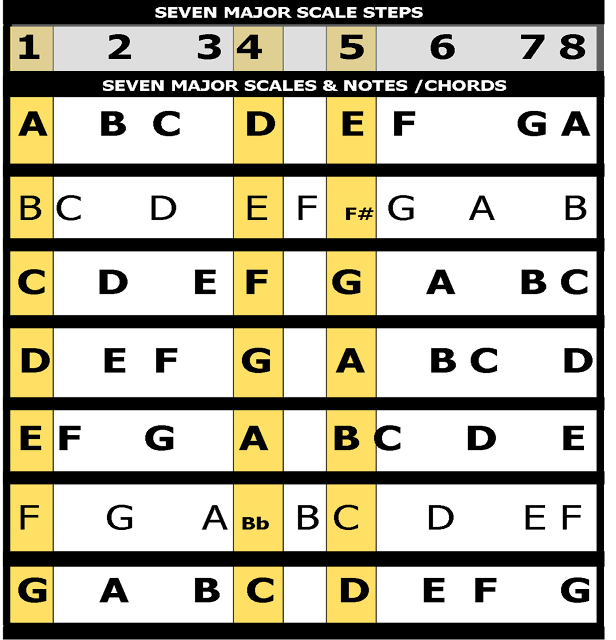 The first thing that you can do with this chart is find the Major Chords in any key!  Using the Numbering System (sometimes called the Nashville Numbering System) can help you find these chords.  The Root chord (or note) is always "1".  The three chords used in any Major Key are always "1-4-5".   Look at the keys of C and G, which are our most popular keys.  In the key of C-- the chords will be C--F--G.   In the key of G, they will be G--C--D.

You can use this chart anytime to find your basic chords for each Key.  There is an even better way to do it.  However, it may require some work.  You have to remember, in major keys, the interval (step or space) between the 3rd and 4th notes, and the 7th and 8th notes, are HALF steps, not WHOLE steps. Each step between LETTER notes are WHOLE steps, except for B-C and E-F.

At the top of the chart, the row "Seven Major Scale Steps" which shows the seven steps numerically.  This is a sliding scale, meaning that we take the seven numeric steps and apply them to each scale, inserting the proper Notes or letter names.

There is a system or pattern to each scale.  The Major Scale pattern is----

To understand the Scale Steps of any scale, you have to understand the fundamental logic of the musical alphabet.  Look at a piano keyboard.  There are white keys (notes) and there are black keys (notes).  The white keys are natural notes (A--B--C) and the black keys are sharps and flats of those notes. (A# etc)  Normally, from one alphabet note to another is a WHOLE step. (A to B, etc.)   There are two places within the musical alphabet where there are basically NO sharp or flat notes.  Those are the notes E--F and the notes B--C.  Whenever you come to an "E" note or a "B" note, the next step is a HALF step. If you can memorize or remember this, and not forget it, it will allow you to totally understand the concept of scales.

On the guitar, there are no WHITE notes and BLACK notes;  therefore, you have to know that a WHOLE step is TWO frets.   And therefore, a HALF step is ONE fret.  Each fret on the guitar equals to a HALF step.   All steps from one alphabet note to the next are TWO frets except from E--F and B--C, which are ONE fret.

The "C" scale is the only PERFECT scale with NO sharps and NO flats.  The sequence of the "C" scale aligns the whole steps and half steps in perfect order.  Whenever you go from the "C" scale to the other scales, there will always be sharps or flats.  You use the scale pattern to figure out where these notes occur.

In the chart above, the scales are listed in Alphabetical Order, not in order of Flats or Sharps.  Start at the TOP with the numeric scale (1-8) and then see where those scale steps indicate a flat or sharp.  We've made it easy for you by placing the notes in the proper places.  Where there is a NOTE under a scale step, it is a natural note (A--B--C--D--E--F--G).  Where there is a BLANK SPACE, it indicates that it is a sharp of the preceding note or flat of the following note.

For example, in the "A" scale, you notice there are BLANK SPACES under the 3rd and 6th steps.  This indicates that, instead of a "C" or "F" note, those steps are actually "C#" and "F#".  Does this make sense?  If NOT, keep looking it over.  Try to look at it in its simplest form.  Don't try to complicate it.  It's just seven steps.

Easy enough?  If it's not making sense yet, just remember-- this is not Beginner Guitar stuff.  This is the Beginning of learning Music Theory.   You may be asking, "How does THIS help me be a better guitar player?"  It may not help your technique, but it definitely will help your understanding of what you are playing.  And this will eventually make a BIG difference in your playing.

Posted by GuiTarHeel at 9:37 AM No comments: